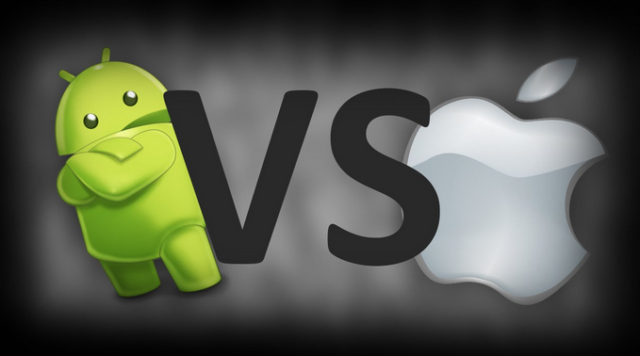 We have some bad news for you if you have an Android device, because a new study was released showing Android failing more than iOS. Previously, Android was the more stable of the two big names in the mobile marketplace. Now, though, it appears Android is beginning to crack as iOS devices are now more reliable. Android is the biggest operating system in the world right now. This new study does not bode well for millions of people who own those devices.

The worst part about the news that the Android devices are now failing more than iOS is the rate at which it is failing. The new study from Blancco Technology Group is showing that the Android failure rate is now at 25 percent. This number comes from the State of Mobile Device Performance and Health report for Q2 2017. So in the previous quarter, Android managed to hold a failure rate of 25 percent worldwide. When you look at iOS on the other hand, it had a failure rate of only 12 percent for the second quarter. 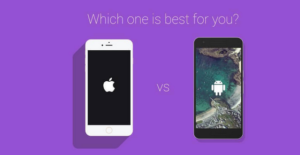 Looking back at the 2016 Q2 report, the iOS rate was up to 58 percent. Since iOS is now failing only 12 percent, that is a huge decrease in failure rates for iOS devices. Apple must be doing something right because it showed a 46 percent decrease. This is really good news for Apple because Apple just unveiled the new iPhone 8, iPhone 8 Plus, and the iPhone X. There are tons of exciting new announcements that Apple has recently made. We also have the release of iOS 11 coming within the next week, which brings a ton of new features.

Another thing that this State of Mobile Device Performance and Health Report showed was that Apple is still crashing way more than Android. The frequency of the apps crashing is still a huge problem on iOS, and is actually getting worse. When you look at the 2017 numbers, iOS app crashing in the second quarter went up to 54 percent. 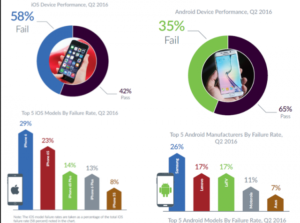 Quarter 1 showed that Apple devices were crashing only at 50 percent, so just within the first and second quarter there was a 4 percent jump in app crashing frequency. Looking at the Android devices, the app crashing frequency went down from 18 percent to 10 percent. This is within the same time frame, so from the first quarter to the second quarter, and that is good news for Android.

Blancco Technology Group said that this app crashing frequency could be related to the frequency in updates. The speed of Apple operating system updates could be why Apple devices are crashing more than Android devices. Android owners, according to the study, also are more likely to root their devices than their Apple counterparts. The study showed that over 50 percent of iOS devices that were looked at still had the Activation Lock feature enabled. This is good news because it means that the Find my iPhone Activation Lock was still enabled.

Each quarter can be different from the previous one in terms of the failure rates. The failure rates can change from one quarter to another. The best part about this new study is that it shows iOS is becoming more reliable. For a company such as Apple, this data could be very handy. That is due to the fact that Apple is about to release a $1,000 iPhone in the near future, It could be what some people need to see and look at before they decide to make their next phone upgrade an iOS device over the thousands of Android devices available.