In Angry Birds Evolution, players will be able to play as over one hundred different angry birds, all of which are bigger and better than ever seen before. From all of these birds, you will have to pick a team to go on an adventure with and defeat the pigs of the island with. These birds will also be able to level up all of your birds and evolve them to become even bigger and have even more special powers. Every bird has their own set of special moves and different stats that they specialize in. For example, there are birds that you will find that are built to deal a lot of damage to the enemies, while others are there to support and heal up the birds on your team. There is a ton of customization and how you build your party entirely depends on how you wish to play through the game. You can choose to play an aggressive style of game that focuses on killing the enemies as fast as possible, or you can choose to win by depleting the enemies of their resources and beat them by stalling out and sustaining yourself. The choice is really up to you and Angry Birds Evolution allows you to make these choices. 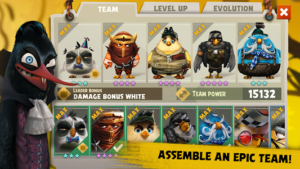 Angry Birds Evolution also has a ton of online play that the developers hope will bring new fans to the series. Angry Birds Evolution has a huge multiplayer aspect that will allow players to compete against each other to see who has the better bird team and who will win in a fight. In addition to that, there will be weekly events and tournaments that players can participate in with the chance of earning huge prizes from winning. These events will be a number of different things, including special mini games, online tournaments, and local tournaments to see who has the best strategy and who has the strongest team. The development team is really hoping to push this online mode by adding all of this online player versus player elements, as well as these weekly tournaments.

In addition to various online modes, players will also be able to join up with friends or online players and form clans. These clans will provide players with bonus experience and opportunities, as well as allow players to compete in online events with their fellow clan members. As it seems, joining a clan has nothing but positive implications, so I would definitely suggest hitting up some of your friends and forming a clan to see if you can become one of the highest ranked clans on the game! As soon as the game launches, I can already tell that there is going to be a lot of competition as to who is going to have the best clan with the best layouts, so you will not want to miss out on those pre registration bonuses!

There are over ninety different types of pigs that you will find as you explore the island and go about the campaign mode. They range from different sizes, shapes, themes, and colors. These pigs all have a different set of moves and bring something new to the game, so you will have a lot of time to explore the game until you see every pig and every bird that has been introduced into the game. Angry Birds Evolution brings an awesome action packed adventure to all players by allowing them to hatch their own birds, and assemble their team with the hopes of defeating all of the pigs on the island. 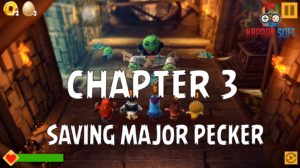 From what I have seen from the trailers and the teasers, Angry Birds Evolution is going to be an awesome game that takes an awesome new spin on the classic Angry Birds franchise. I am definitely hopeful that this game is going to provide an awesome experience for the players, as it offers something new to the mobile genre. Angry Birds Evolution is going to be an awesome story game filled with a ton of action for players to get behind. The development team really believes in this game, and they are going to do all that they can to make sure that players are having the best experience possible when playing the game. Again, the game will officially be released sometime in June of 2018, so you will want to go straight to the app store page and pre register for the game so you do not miss out on all kinds of goodies. These goodies will definitely give you a huge advantage when starting out, plus it is about an eight dollar value, so you definitely do not want to miss out. Check out Angry Birds Evolution today on your app store and do not forget to check out the pre registration and set your clocks for when the game does finally launch in June!