Bullet Strike: Battlegrounds is a Battle Royale style of game, where you drop into a deserted town by yourself, and battle against 90 other enemies who drop down as well. The entire appeal of this game is the fact that you drop down on your own with nothing but your fists, and loot as much as you can while battling against everyone else that dropped down alongside you. Currently, Bullet Strike: Battlegrounds is in the alpha stage of production, where the game is very much still in testing phase. In addition to that, Bullet Strike: Battlegrounds is currently region locked to Canada, and some other European countries, as that is where it is cheapest for the servers to be located. You can find out where the game is available closest to you by checking out their website. 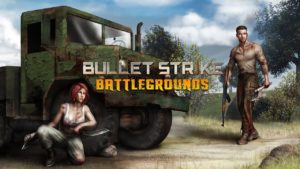 Bullet Strike: Battlegrounds is a really fun game that brings the extremely popular Battle Royale style of game, and brings it straight to your phone. The game currently has one extremely large map, and the size of that map gets smaller and smaller as the time spent in the game goes on. The game shortens the map by releasing gas in areas outside of the indicated region. These regions are random, so you cannot plan to anticipate where the center of the map is going to be once the gas is released.

The game currently has over thirty unique weapons scattered around the map for players to find. It is not simply enough for you to just find the guns, but you will also have to loot ammunition, attachments for the gun, and healing mechanisms for your character. Everything you need is provided in the game itself, you simply have to walk around until you can find it. Once you get geared up, it is up to you to hunt down the enemies, and take them out one by one until you are the last one standing. Winning a game will not only give you a ton of bragging rights, but it will also give you in game currency, that can be used to change your character’s appearance. In addition to that, you get points that place you on the game’s leaderboards. Obviously, there are a ton of bragging rights when there is a leaderboard, and the players in first obviously have the most.

Check back for a full cheats guide for Bullet Strike Battlegrounds! 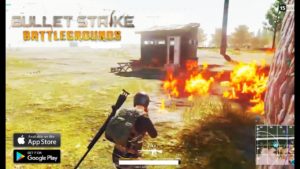 In addition to having a ton of weapons to loot, there are also vehicles in the game that players can find and drive. Unfortunately, vehicles only come with a little bit of gasoline, and you will have to scavenge and find more while out and about. You can use these vehicles to your advantage by driving around and scouting out more places in a shorter amount of time than you otherwise could on foot. There are also a lot better chances of you fleeing from enemies that could have more gear than you if you have access to a vehicle. A vehicle will also make it a lot easier to get into the safe zones, or zones that are not filled with gas, if you are further away from them.

The developers have been bolstering about the game’s ability to fully dress and customize your characters. The game says that it has a state of the art customization mode, which allows you to fully deck out your character. Although it is true, it is nothing revolutionary that has not been done before. Though, I do like that the game allows you the basic choices in regards to what your character looks like, it adds a bit of a personal touch to the game that makes it feel more like you’re actually in the game, rather than just playing as someone else. 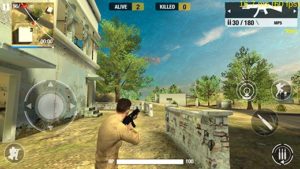 Bullet Strike: Battlegrounds also allows you to queue up with your friends, and go against a bunch of other enemies that are queued with their friends as well. This allows you to come together with your friends and play the game alongside your friends. This makes morning trips on the bus, or a long drive with your friend feel like nothing as you’ll have the game to play. The games are relatively quick, so the most you could possibly spend in one session is about twenty minutes, if the game is going on for a long period of time. Since the games are so short, you can feel like you can play a lot of games, with a very little time commitment. You also do not feel discouraged for gearing up just to lose it all when you die.

I definitely like the direction that the game is heading, and I am optimistic about the release of the game when it fully launches on the app stores. The game thus far has a really solid base that I would love to see expanded upon further. The map that the game is played on is super nice looking, and all of the graphics are made for the game and fit the theme of the survival of the fittest. I also really enjoy all of the feedback that the developers have been taking in regards to the game and where it is going. The developers are constantly checking their twitter and comments received from players of the game to see where they can go with the game, and what improvements they can make. 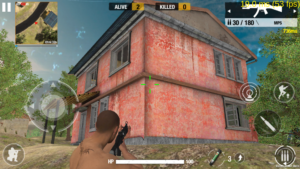 For a mobile game, I definitely think that this Battlegrounds game is a step in the right direction. This is the first of its kind on the mobile platform, so I definitely think it will attract a wide range of players, especially since the Battle Royale style of game is extremely popular on PC and console games right now. I am most excited to see the future of this game, and how the game is received when it fully launches, which has yet to be stated by the developers. The game definitely has a lot of work to be put into it, but I think with the right motivation and the time, this game can without a doubt take the top spots among games in the app stores. I am most definitely looking forward to the full release of this game, and I think that anyone else who has any sort of inkling to play this game should too. You can sign up for updates on the website itself, and these updates will give you everything new that is going on for the game, as well as a dates for when it will go live in your area as soon as the developers have more info.