Instagram and Messenger have both had dark mode support for a while. There are a few people already reporting that they have this new setting within their Facebook app. Continue reading to learn more about dark mode for Facebook and the new public rollout of this feature.

If you open up the Facebook app on your iOS device, you might notice a new feature this week that’s been long requested by users. The company has finally added dark mode support for those on iOS devices. The new dark mode support is rolling out slowly both for the iPhone and iPad. You’ll notice that this new setting can be found in the Facebook app. It’s important to note that this is a slow roll out and could take some time to reach your device. 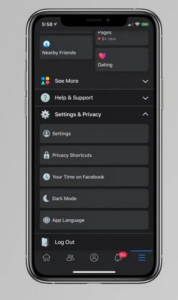 It was a few months ago that we first heard Facebook was in the middle of developing the dark mode for the main Facebook application. Back in April, we knew that the feature was not accessible to the public, but some people were able to find it hidden by playing around within the app. Well, you don’t have to worry about trying to dig into the app to find the setting because Facebook has started the official public rollout of dark mode.

It’s very easy to find the new dark mode setting in the Facebook iOS app, so open up the app right now to see if you have the feature. If you are one of the people that just received the feature in the app, you’ll find it through the Settings within the app itself. 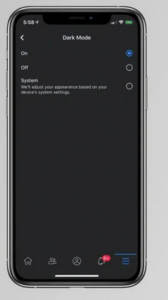 Just go into the app, click on the three lines, and then click on the “Settings and Privacy” section. It’s at that point you should see the dark mode feature and ability to enable it if you have it. So it’s incredibly easy to find and enable or disable as you’d like. We like how it’s easy to find because some apps make dark mode hidden deep within the Settings and it’s more time consuming to enable.

You’ll notice that you can adjust the actual dark mode appearance as well. This ability is based on what your preferences are on your iOS device, which you can change at any time. We love this because it means the app changes appearance automatically. It will work to fit the scheduling of dark mode on your device depending upon what times you have dark mode scheduled for.

What you’ll notice with the dark mode is that it’s not black like other apps have chosen to go within the Facebook family. While Messenger and Instagram both use black, the main Facebook app has chosen to go with the grayscale look. The icons and logos will have white accents in the dark mode, and we bet some people won’t be happy with this look. A lot of people like the black design and since Messenger and Instagram use black, it’s odd having Facebook itself in grayscale dark mode.

It’s important that we note that not everyone is seeing the dark mode feature in the Facebook iOS app yet. Facebook said that it’s still only available for a small group of people. It’s going to continue rolling out over the next week. That means if you don’t see it yet, then you likely will receive this update very soon. We don’t have a time frame of when everyone will have the feature. We just wanted to tell you to hang in there and you’ll see it sooner or later. It’s also possible some slight tweaks might be made to this feature before it rolls out more widely to everyone. 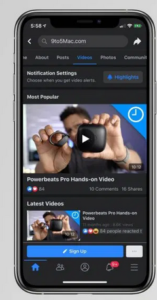 In the comments below, we want to know if you see the dark mode setting yet in your Facebook iOS app? Do you think the grayscale appearance is better or worse than the black dark mode appearance? Is it easier for you to read using dark mode when it’s actually dark outside? Do you find that your vision seems better when you’re in dark mode as opposed to the bright light of your screen? Would you rather the main Facebook app use the same dark mode appearance as Instagram and Facebook Messenger?

Do you think it’s weird Facebook has chosen a different dark mode theme than Instagram and Messenger? Have you received the dark mode support yet or are you still not seeing this option in your app? What other changes can Facebook make for iOS to make the app more useful and user-friendly? Lastly, do you think all apps should make dark mode available for users? We’re shocked that there are still some very popular apps out there that haven’t enabled a dark mode feature yet.