If you have recently downloaded WhatsApp onto your Android device, you might want to check and make sure it was not the fake WhatsApp that was just removed. Over 1 million downloads happened of the fake WhatsApp before it ended up being removed by Google. This is just the latest fake app to make it onto Google Play Store and convince people to download it. If you have been paying attention lately, there have been a ton of fake apps on Google Play Store. Google is supposed to have guidelines in place to prevent these types of things from happening, although many apps are still able to make it through. Read on to learn about the new fake WhatsApp and how this fake app could affect you.

Fake WhatsApp Had Over One Million Downloads Before Removal

While fake apps are definitely common in Google Play Store, this was a majir one. The fake WhatsApp had over 1 million downloads before it was pulled. That is a pretty big number when compared to other fake apps. Many have quickly landed and been removed from Google Play Store. If you want to know the official name of the app it was Update WhatsApp Messenger. This app was developed by someone called WhatsApp Inc. As you can tell by the pictures of the app, it looks like the real WhatsApp. Everything about this app looked officially, which was done on purpose. The more official it looks then the more people will be willing to download it. That is likely why this fake WhatsApp had so many downloads, since it looked like the real deal. 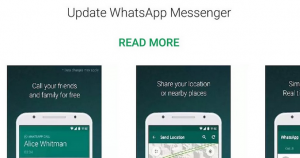 It is even more concerning that the developer was also able to take the name WhatsApp Inc., and then put this out on Google Play Store. The developer likely added a space in between the name WhatsApp Inc., which is how it could fool people. It could fool the unsuspecting people on Android to download it and believe they were downloading an update to WhatsApp. The objective to this fake WhatsApp appears to be to get people to click on third-party advertisements. Once you have clicked on these third-party advertisements, you could then be asked to download malicious software.

It is likely that this fake WhatsApp had malicious coding wrapped inside of it. The app itself seemed ad-loaded and then another code was within the app itself. While the app did not have that many permissions associated with it, the fake app is still dangerous. It is trying to install a second APK, which also contained the WhatsApp name. The app also had a blank icon and no title, which is also very suspect. People would not have noticed anything weird with this app though went they went to download it. Due to it looking like the real deal, no one would have looked closer at the developer or the name of the app. 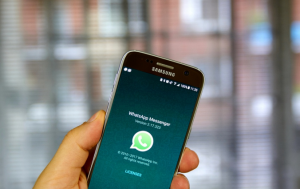 The good news here is that the app was removed from Google Play Store. The bad news is that the app developer really went to extremes in order to make this app appeal to those who are trying to download the chat app. Considering the time and effort that went into making this app look like WhatsApp, it could pose risks in the future for other popular apps on Google Play Store.

We likely will see more apps in the future using this technique. That is, until Google comes up with a way to keep fake developers from imitating the real developers. If you have downloaded the app, with the title Update WhatsApp Messenger, you should immediately delete the app from your Android device. It is always a good idea to double check when downloading an app from Google Play Store. Any updates to apps like WhatsApp will come from the main WhatsApp and not have a separate update app.