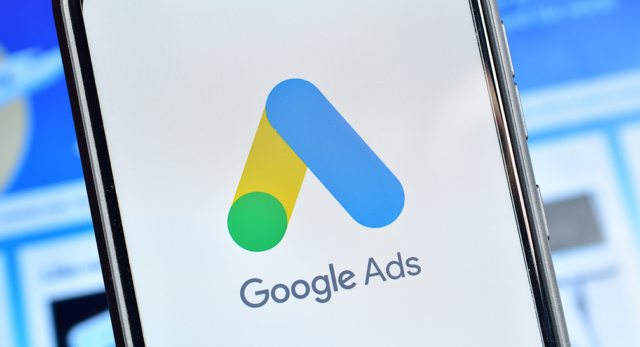 If you have the Google Ads app on your Android device, then you’ll be happy to know that the dark mode capability has finally been released for this app. The Google Ads app has a dedicated dark mode now, which means it’s on par with several apps now available for Android. System-wide dark mode didn’t come to Android until Android 10, but Android 10 has been out for quite a while at this point. 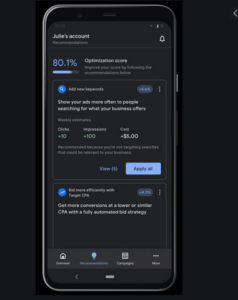 Google said that when Android 10 was released, it would begin updating all Google apps to support the system-wide dark mode feature. A lot of Google apps have been left out of this update though, including the Google Ads app. You may know Google Ads by the previous name of Google AdWords, so it’s important to note that this app is not Adsense. Google Ads is an advertising service and it allows you to create your own advertisements.

What Is Google Ads App & How to Get Dark Mode

As mentioned above, Google Ads allows you to create your own advertisements. These advertisements are then placed on various Google services and products. Obviously, you have to pay to get your advertisement on Google products and services. 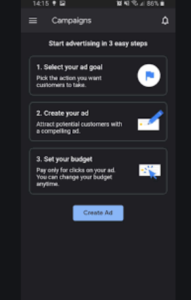 With Google Ads, you can manage and schedule these advertisements. You also can monitor various aspects of the advertisements that you’ve paid to have placed on those various Google services and products. It’s a very handy app to use if you are into creating advertisements and it’s a great way to monitor the progress of your advertisements.

It’s also very easy to find the dark mode on the updated Google Ads app for Android. If you want to check it out for yourself, just go to the Settings and then select Theme. From there you will see the Dark mode option right there in the Theme options. The version you need to be updated to is version 2.16.299354627. This new app version is live right now in Google Play Store so if you don’t have the update yet, you can go there to manually download the update.

Are You Surprised Google Ads for Android Gets Dark Mode Ahead of Other Apps?

Some people are a bit surprised that Google Ads for Android has received the dark mode update considering other more popular Google apps still haven’t received the support yet. Google Ads is a very useful app, but it’s also a niche when you compare it to other popular Google apps. This app isn’t quite as functional as the desktop version and it’s also not as popular as the desktop version. Google Ads is a business-focused app that only a certain group of people use, but we’re glad it did receive this update. 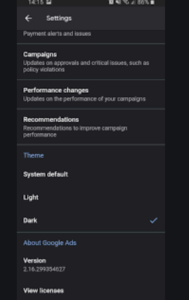 The app is fairly bare and simplistic so we want to know if there are any features you wish would come to the app for Android? Do you use the app and do you think more features should be released for the app? What other apps do you use to keep track of your advertisements and items you promote online?