If you have an Android device, you might want to know about the new Google Contacts update. The new update does not bring any new features. Even without the new features, the Android update is worth downloading for the other improvements. There are a ton of new improvements in the Google Contacts Android app we wanted to tell you about. Read on to learn more about the new update and what you can expect to find if you download the latest version.

While you might be sad that there are no major new features in the Google Contacts Android update, there are some other improvements to talk about. The new improvements will make Google Contacts much easier to use on your Android device. Before we talk about the new improvements, there was a minor additional feature added to the app. You will notice there is a new action button which can be found in the Contacts. The new action button will allow you to text and call people much easier. 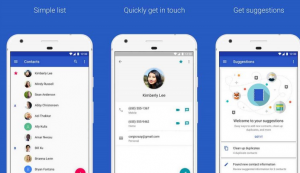 As for the new improvements in the Google Contacts app update, there is now a large contact photo. You might remember the larger contact photo as it was a feature added a long time ago. It was removed in a previous update, but people in the community sent in feedback asking for the feature to come back. The developers say that they had plenty of requests to bring back the large contact photos, and that is what they decided to do in the Google Contacts update. You will also notice that in this update, you can merge the duplicate contacts that you have all at the same time. This is definitely a good addition to the app because duplicate contacts can be very annoying. The ability to merge them all at the same time is definitely going to save you time.

Also, another improvement we see in the Google Contacts Android update is the addition of the G Suite Directory. This will allow you to find your colleagues from work and search for them with ease. You will also notice that this update brings automatic suggestions for adding contacts. The suggestion to add the contact will be for those people you communicate with a lot on Google. If you communicate with certain people across Google Platforms enough, the suggestion will come up for you to add them into your contacts. Sometimes you might be thinking about adding someone into your contacts but then forget. That type of thing happens a lot, which is why now there is an automatic suggestion to add that person into your contacts.

Finally, the Google Contacts Android update will bring the ability for you to customize your Contacts view. You can customize the main Contacts section to show the labels that you want to show. This is definitely a good addition and it will improve your overall experience with the app. If you are trying to make labels for your Contacts, this new customization option will definitely come in handy. So as you can see, there are not any new features to speak of in the update.