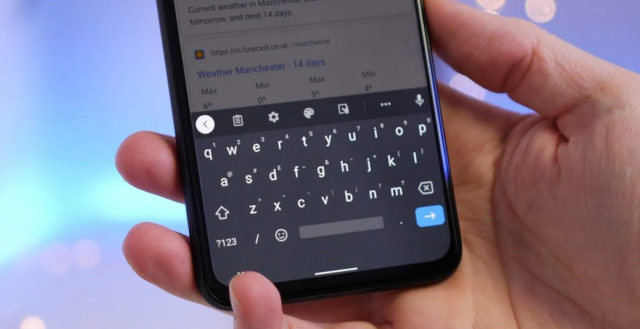 We’ve got pretty cool news for you if you use the Google Gboard keyboard on your Android device. It appears that there is now Google Lens integration within the app. This new feature can be found in the Gboard version 9.6 beta, which was released recently. If you currently use the Gboard app for Android then keep reading to learn more about this really nifty addition to the app.

If you are using the newest beta of Gboard, which is version 9.6, you are going to notice a new integration that we think you’ll be happy about. The newest feature to be added to this beta is Google Lens integration.

You might remember that about a month ago, Gboard lost the functionality of a built-in search. That was something a lot of users weren’t happy about. At the time, we weren’t sure what was happening with that. We also weren’t sure whether or not another app or tool would replace it.

Instead of having a typical search, it appears that Google is looking to replace it with a more visual search option. It’s important to remember that Google Lens integration is found in the Gboard beta. That means it’s possible that it could be removed from the stable release of the app in the future.

There are a lot of people that use the Gboard beta so we wanted to tell you just how easy it is to find the new Google Lens integration in version 9.6 beta. There will be an overflow menu and that’s where you will see the new shortcut for Google Lends. You’ll also notice that the icon is also present and if you click on it you will have access to Google Lens just like you do with the icon on your home screen.

If you want immediate access to Google Lens, all you have to do is drag it over to your main bar. The accessibility of Google Lens is just like other apps so it’s not hard to figure out. With the new Google Lens integration in Gboard, you’ll also have access to the “Text” filter.

You can automatically open this from within Gboard and this is what you’ll use if you want to search items within the real world. You can search or copy using the “Text” filter and it’s really handy to have as you travel around. There was already the option to “Listen,” “Translate,” “Search,” and even “Copy to Computer.”

In the new Gboard beta update version 9.6, there is another addition we wanted to tell you. You will also notice that you have a new option which is called “Send to keyboard.” By using this option, Gboard is going to paste what the visual item was in Lens and it will be automatic. This will be found within the text field that Gboard was recently on. You won’t see this option if you don’t have integration between Lens and Gboard.

We love this new update because it allows you to see something within the real world and then copy and search for it. Google Lens itself is very cool and it’s worth checking out if you haven’t already. Having Lens integration right there within Gboard is going to make using the tool much easier than ever before. We are hopeful that this integration is going to be in the stable release of Gboard version 9.6. The stable version should be released sometime within the next month or two.

Below, in the comment section, we want to know if you are seeing the Lens integration. This should only be found within the Gboard app if you’re running Android 10 or Android 11. Have you used Google Lens before? Do you think it’s a useful app to have on your Android device? Are you someone that sees things in the real world and wishes that it was easy to copy and search for it?