Are you a female looking for some friendship? If you are looking for some new friends, you might want to check out Hey! VINA. Hey! VINA is now available on Android and this is an app that is female-focused and is not a dating app although it is similar to Tinder. Instead of Tinder, where the purpose is often times sexual, Hey! VINA is an app that wants to help you make new friends. The app is not supposed to be a dating app or a sex app, which is why it is important to reiterate it is for friendship.

If you are a woman and in need of some friends, the Hey! VINA that just launched on Google Play Store might be just what you need. The app is similar to Tinder in terms of the setup and overall design, but the goal is not of any type of sexual relationship. Instead of trying to hook up with women on a date, the goal of this app is to make new friends that are women. You do not swipe with Hey! VINA, and instead an algorithm is used to help you find new women to talk to. 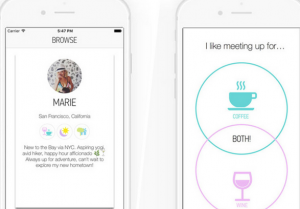 The algorithm works by getting interests from you as well as mutual friends and your location. All of this combined with some quizzes similar to those from BuzzFeed, will help the app match you with possible friends. Hey! VINA also will only show you one photo from the other person, so it is not like you can be superficial and choose to be friends based off of looks. Hey! VINA first launched on iOS, which was back in early 2016. The company said in the first week of it launching on iOS, the app had more than 100,000 downloads.

Since iOS saw Hey! VINA launch last year, the company has decided to step into the Android world with the release of the Android version of the app. The company ended up with a lot of feedback after the iOS release. A lot of this feedback was geared towards asking for an Android version. In fact, over 500,000 began asking for Hey! VINA to come to Android. It looks like the wait is over as the app was just released for those on Android.

Hey! VINA is available in over 158 different countries and has helped match more than 1 million people. A lot of female-focused friendships have been created thanks to Hey! VINA and the app algorithms helping you find local cool friends to chat with. The creator of the app, Olivia June Poole, said that this app is all about helping women find a sisterhood. Women have a hard time going through life, often times not having many female friends to lean on in times of need. Hey! VINA is there to help you find a group of friends, who hopefully will help you by supporting you emotionally or giving you a shoulder to cry on if you need. The app is focused on helping people connect through shared experiences and stories.

You will find that you have an Account Dashboard in Hey! VINA on Android. This dashboard will allow you to make a friends list, and also allows you to see your social statistics in the app. From this Account Dashboard, you can also make quizzes or take quizzes and manage your memberships. There is also a group messaging feature available in Hey! VINA. For the company behind Hey! VINA, coming to Android was an obvious choice. That is especially since Android is the most common operating system in the world.

The founder of the app said that the company looked at the website traffic over time. Most of the website traffic was driven by people on Android devices. Over half of the traffic was from Android alone, which is pretty amazing. It was an obvious choice to get that Android app out as soon as possible due to the large amounts of people coming from Android. If you would like to try out Hey! VINA and make some new female friends, you can head to Google Play Store and download the app right now.