Jumanji: The Mobile Game brings everyone’s favorite childhood movie straight to their mobile phone. Jumanji: The Mobile Game is developed by NHN Entertainment Corp and is categorized as a board game. The game is rated E for everyone, and is available for the Android Google Play Store, as well as the Apple iTunes Store. Since its release in early December, the game has received a decent amount of support from its fans. The game currently has more than one hundred thousand total installations, and an average rating of 4.1 out of a possible 5 total stars. The game has received almost constant updates since its release, with new content being added with almost every update. It is worth nothing that even though the game is free to play, it does offer in app purchases for real money. Since it is a game that is aimed towards a young audience, it is worth considering removing the ability to remove in app purchases, to avoid any accidents a child might have with the game. The in app purchases range from the cheapest package of just a handful of the premium currency, to a full on starter package to help you through the game’s early stages. 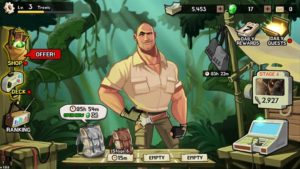 Jumanji: The Mobile Game is a new type of board game for the mobile platform. It is extremely different than the ordinary board game, and plays much quicker and relies a bit more on the randomness from the game. The game has an awesome and unique concept where each player picks their favorite character, and fills their deck with cards that they collect to help them against the opponents. The board itself is basically a big circle, and as you go around the circle, you can build houses, and place your units on the different spots around the board. As you go around the board, if you land on another opponent’s square, you will battle against whatever they have on their square with one of your units.

You can find cheats for Jumanji the Mobile Game here soon!

Jumanji has a ton of collectible cards for you to find as you progress through the game. The game has a base story mode, which kind of vaguely follows that of the movie. As you progress through this story mode, you will unlock a lot of new cards that you can add to your deck to bring to online play, or to continue to progress through the story. The game features many unique characters like Dr. Bravestone, Professor Oberon, Ruby Roadhouse, and many more from the iconic movie. Fans of the movie will definitely get enjoyment out of seeing their favorite characters in the game. The art style in this game is very cartoonish and stays true to how the characters look in the movies and the story. I really enjoyed seeing the art style that the developers brought to the game, as it is unique, and forms a complete scene that I can see makes a lot of sense together. 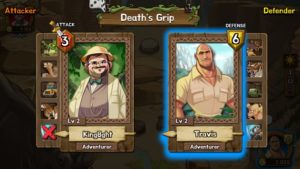 Jumanji: The Mobile Game also offers a real time player versus player experience. The game allows you to play against your friends in real time against one another at the tap of a button. The game allows you to send out invites to your friends, and if you do not have enough, your game can be filled with either computers, or other real players. This allows you to show off your deck and brag to your friends about how far you’ve progressed through the game. This also attracts a lot more players into the game, as it adds that competitive feeling that everyone likes to feel when playing any sort of game. I definitely think that adding the ability to play against your friends was a great choice on behalf of the developers, because it brings friends together after spending time completing their deck.

Another great feature in Jumanji: The Mobile Game is the wide range of arenas there are to play in. As you progress through the story mode, you will see a wide range of different stages for you to play in. They range from a winter environment, to a scorching desert. I really enjoyed seeing all of the different backgrounds and styles that you could play on. I also loved that they brought all of these different stages to the online version of the game, as they really made the game feel different each time you played. Although they were more or less the same map, it was nice having some sort of change rather than playing on the same old field each time. The story also contains a lot of unique and collectable items that you can find if you explore and click around on the battlefield. Although these are not enabled on the online version of the game, you can find these artifacts and add them to your deck to use during online play. 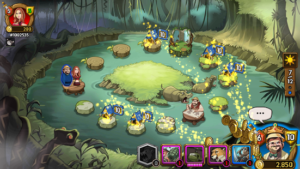 The developers have shown a lot of interest in keeping fans in the know with Jumanji. You can find them on Twitter, Instagram, and Facebook. On all of their social media platforms, you can directly ask them questions about the game, as well as submit bugs. In the experiences I have read with their support team, they do a great job at responding to each person who writes in, and do an even better job at fixing any game breaking bugs in a reasonable time frame from when they are reported. As stated above, the developers are updating the game very regularly, with updates ranging from additional cards, to new expansions for the story mode. The developers have done great with adding content into the game, and at a pace that keeps the player base interested enough in the game to stay around.

I definitely think that this game is one of the more hidden gems on the marketplace, and I would definitely recommend trying it out if you have a liking towards board games, especially those with a unique feel to them. Jumanji does a lot of things right, as it has really addicting gameplay that most people are sure to love, as well as keep it easy to jump in and get started with. I definitely think this game is a solid 7/10, and most definitely worth checking out. I am very optimistic that this game is going to be a lot bigger than it currently is given that they keep updating and supporting the game. 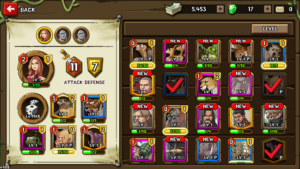