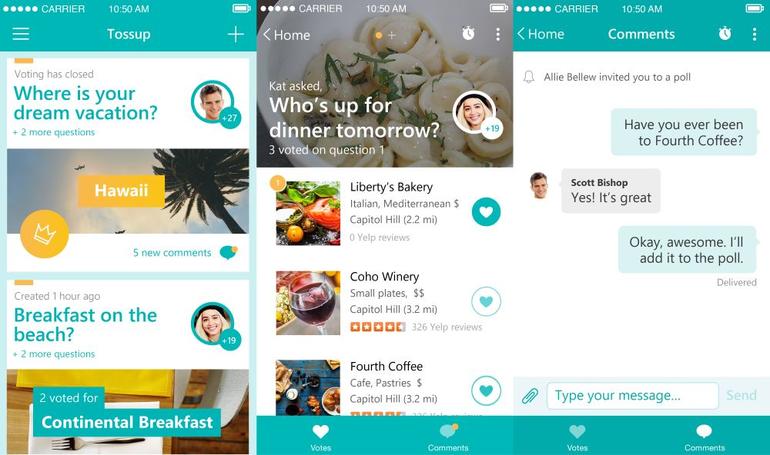 Microsoft have recently released a new, and certainly interesting, social application in the US as well as Canada – just last week. Microsoft promises that the new application, known as ‘Tossup,’ will help you to organise plans with your friends and family members even easier than on Facebook.

What Microsoft Has to Say

“Aiming to advance Microsoft’s mission of helping people achieve more in life and work, Tossup is a lightweight and fast mobile experience that helps groups plan and make decisions by giving them the ability to vote and suggest choices.” says Microsoft. This is certainly something new and Microsoft seem eager to let the public determine how well their application works for organising events.

“It’s an ideal tool to make decisions about timing, availability, what to do, nearby venues and spending limits. Information for restaurants is pulled from Bing – opening hours, reviews, addresses, etc. – to help make decisions. To get answers quickly, groups can add a countdown clock, then save the event to their calendars, turning those plans into reality,” quoted from Microsoft.

We can see that Microsoft plan to make things a lot easier for their users – this is something which the software giant have always tried their best with, and they have expressed this with the release of their mobile operating systems just a few years ago. But will Tossup be up to scratch for today’s very critical smartphone users? Time will tell – since the app is fresh off the production line and only released last week.

Microsoft also promises that Tossup holds a lot of new and unseen features, as well as older ones which still provide good use. Users are also able to invite their friends via text/SMS or email them to join.

“You ask the questions. Your friends cast the votes. Where to go. When to meet. Tossup lets everybody know.” – Tossup application description

From ratings, users of Tossup seem to be thoroughly enjoying Microsoft’s new social application, with ratings of around four stars and above being the most popular. With these strong ratings, we could see Tossup replacing the use of Facebook’s group messenger service for organising events with friends and family members.