In the latest Microsoft OneNote for Android update, there is now support for fingerprint unlock. This fingerprint unlock option will be available in the Notebook section of OneNote. If you use Microsoft OneNote for Android, you will love the new password protection feature. The new version of Microsoft OneNote is version 16.0.8625.2040. As you probably know, Microsoft has been focusing a lot of time on both iOS and Android lately. Microsoft essentially killed off Windows phones in order to focus on making better apps and new apps for the two main smartphone systems. This update should be rolling out now across all Android devices or you can head to Google Play Store and download the latest update for free. 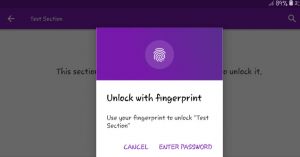 With the Microsoft OneNote for Android update, it is important to note the limitations of the fingerprint unlock. You cannot simply lock any portion of OneNote that you want, and it cannot be directly setup. In order to use this feature, you first need to create your password. Once that password is created, you will see a prompt that will ask you if you would like to use the fingerprint unlock feature the next time you open the section. Since the yes option is automatically toggled for you, you will not need to toggle it yourself. This means that the next time you are trying to open the section that is password-protected, you have the ability to unlock using the fingerprint unlock feature.

The new fingerprint unlock option on Microsoft OneNote for Android adds a whole new layer of security for you. Before, you only could set a password on your notes if you used the app on the PC. Now, you will have that ability right from your Android device. People who have used the beta version of this app on Android likely have used this feature before. It was in the beta and preview testing phase for a while, but it is just now available to all Android users. The real downside here is that this fingerprint unlock feature is only available in certain sections of the app. If you would like to make sure all of your important files are secure, you can write them in the sections specifically that will be password-protected. 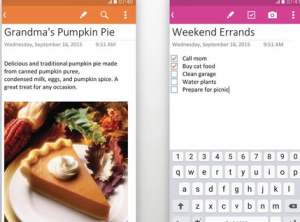 Other changes in this OneNote for Android update include your normal bug fixes and overall app performance improvements. We are most excited about the password protection feature using the fingerprint unlock. Since everyone has a unique fingerprint, there is no way that someone other than yourself will be able to access the files in the app. If you have OneNote on your Android device, you might have already seen this update roll out. It could still be rolling out to certain Android devices. Do not worry if you have not seen it yet. If you would rather not wait for the automatic update, you can head to Google Play and download the update manually. This feature is great if you want to protect work files or family recipe. You can do all that and more with the fingerprint unlock feature for added password protection.