Many older people today can get easily frustrated when trying to match their younger family members by using smartphones with many gizmos and applications. Sometimes the frustration reaches such a high level that older people can lose interest in trying to use technology because they are not very good at it since it is such a new thing in our society. The number of older people starting to use smartphones and other techonological devices has increased significantally over the past years so this problem needs a solution and it does have a solution that was recently created. An application has recently been created that makes messaging dramatically easier for older people or those who have trouble spelling. The Android application is called MaxieKeyboard and the keyboard works with all existing apps replacing the default keyboard. So what exactly is MaxieKeyboard?

What is this app/ How does it work?

When asked to explain the app he created, Dr. Dunlop stated that “Touchscreen smart phone technology is still relatively new which, in itself, can make using it daunting for older people. When you add in the extreme sensitivity of screens and the lack of physical feedback from them, it’s easy to see why many older people either have frustrations or avoid using smartphones altogether.

He even went to say that,

“However, that demographic is now more active on social media channels and other platforms well suited to smartphones than many people realize. We wanted to develop an app which would allow them to be digitally active with the latest technology and MaxieKeyboard is a step towards that.” 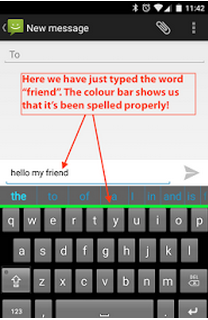 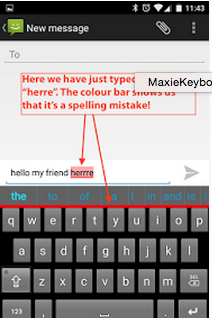 So basically what the new application MaxieKeyboard does is that the app clearly highlights spelling errors and the words that are auto corrected in the text, email, etc. that the user was typing. This is all done by the engine the app runs on that spell checks the writing and suggests the best words or ways to phrase something so that a message can be as clear as possible to the reader of that message. Besides highlighting misspealled words this application also has a color bar on the top of the keyboard that when lit red means the user has made a mistake in the message so this helps show the user instantly that they are incorrect, and this feature helps speed up the process of writing a message because the user does not have to waste time checking to see if they wrote something correctly since the colored bar tells them if they did.

How to enable this app on android devices

It is quite simple to enable this application on android devices. To enable the app, users must go into their device settings, then select Language and Keyboard and then enable the keyboard app from there. MaxieKeyboard uses the OpenAdapTXT framework from Keypoint and also the ASpell open source library.  As mentioned before this application luckily has the ability to be used within all existing applications on the android market.

Is this application worth the download on the Android Market?

As we enter a new age where every phone is a smartphone and now everything is touch screen there needs to be something out there to help the older crowd who wants to try and use techonology. Many cell phone makers have tried to make special phones for older people but these have not solved the problem. Older people want to have the confidence that they can easily use smartphones without having to worry about making errors.  Something needed to be created for older people because it is inevitable that as people grow older they will develop problems that can make sending something as simple as a text message difficult because of physical problems.

Overall, I highly recommend giving this app a try for those who have trouble typing on their smartphones. This app was even developed by taking the suggestions of 35 test subject that tried the keyboard out which makes this keyboard highly reliable. Dr. Dunlop and his team wanted to revolutionize keyboard assistance and they have done so through MaxieKeyboard so go give this app a try and hopefully it will help make sure that your grammar is correct and concise.