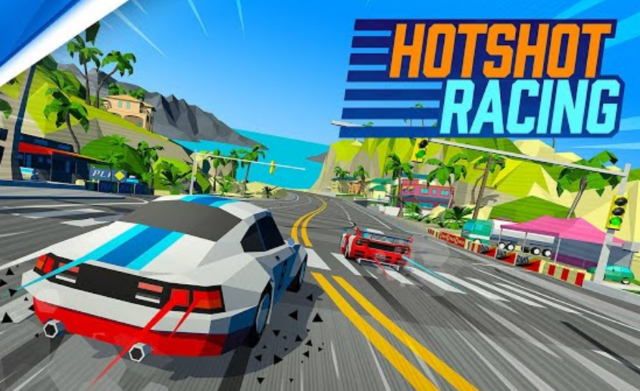 Hotshot Racing just released to Steam this week and this is a game we’re eager to tell you about. If you’ve been looking for a new game to play on Steam, then this game might just be what you’re looking for. There might be a lot of racing games on Steam, but not many of them are retro-styled in the ’90s theme we all remember from our childhoods. We wanted to share the details about this new game available on Steam since we know a lot of Steam fans enjoy throwback games.

Hotshot Racing might already be a game that you’re considering purchasing on Steam, but we know a lot of people haven’t heard about this game yet. It was just released on Steam for $15.99 including the launch discount which is 20%. The launch discount won’t last long so if you want to get this game for a great price, now would be the time to go get it. 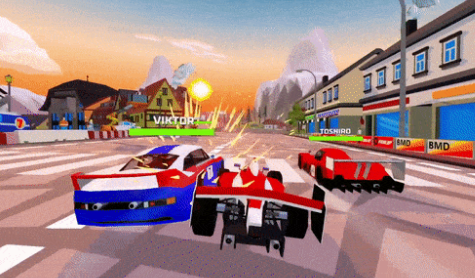 Hotshot Racing is a ’90s retro-style arcade racer and it’s pretty cool looking if you ask us. It’s similar to Horizon Chase Turbo but the artistic styling is more like Virtua Racing. If you’ve played and enjoyed either of those two games, then you’ll really enjoy Hotshot Racing. There’s a lot of drifting going on in this game which is always a good thing and there are more than 16 circuits in the game for you to race on.

You will notice that you can race on the coastlines, deserts, and jungles, but there are many other cool racing circuits are available in this game too. We wanted to talk a little bit about this game because it’s going to bring you back to your childhood when you’d go to the local pizza parlor and play the arcade racing games. Sometimes you might have played by yourself, while other times maybe you were competing with your friends. There’s something magical about the look and feel of those retro-styled ’90s graphics and gameplay mechanics that are just comforting to people.

We just told you about the 16 circuits, but did you know that you have four modes in the game too? The four modes are Grand Prix, Time Trial, Drive or Explode, and Cops and Robbers. Cops and Robbers is where the cops are chasing the robbers and the robbers are trying to get away from the cops, which seems like perfect timing given the issues going on in America right now. 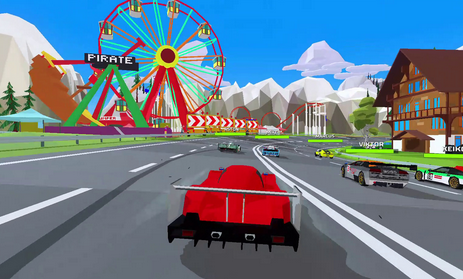 Drive or Explode is a mode that can be best described as being similar to Speed. The main premise here is that if you’re going under a certain speed, then your car is going to blow up. Time Trial and Grand Prix are self-explanatory so we don’t need to get into what those two modes are about. You also will have playable characters in the game, which is pretty cool as well.

One thing we did want to bring up about this game is that it has a ton of online features that seem pretty standard these days with Steam games. We’ve found that people really enjoy the online features, especially as people are still stuck at home due to coronavirus.

Within all four modes of the game, you can play with up to seven other people online, which means eight total players. You also can use split-screen with four-players on each team. This is a local split-screen option of course, and it’s definitely fun if you like to play with people near you or just play with friends. 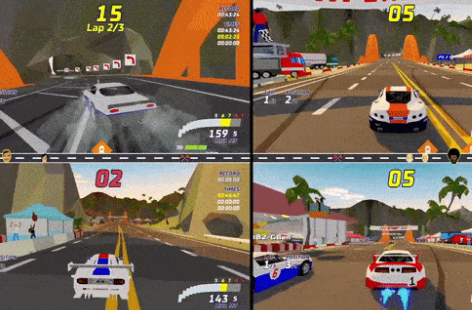 We want to know in the comment section below whether or not you’ll check out Hotshot Racing on Steam. Do you like that this game offers local split-screen and the ability to play with up to seven other people in an online multiplayer mode? The game has leaderboards too so it’s great if you’re someone that enjoys competing with other people and trying to get to the top of the leaderboards. We also want to know if you like the ’90s throwback retro-styled video games and if so, which game has been your favorite so far?

Do you like old racing games or is there another type of game that’s your favorite? The old fighting games were always fun too and the graphics of those ’90s arcade games are something we miss with the technology we have today. If you purchased the game and played it already, we want to know in the comments below what you liked and disliked about this game. How do you think this game could be improved in future updates?