For some people, walking home during the middle of the night can be an extremely frightening experience. However, there is a smartphone application that can call the emergency services automatically if you get into any trouble. This application could help to make those people feel a lot safer.

SafeTrek takes advantage of the pressure sensor of the smartphones touchscreen, which can be used to make an alarm. If the user removes their finger from the screen, the alarm will call the police unless a four-digit pin code is entered. The application uses the GPS system within smartphones to send police the user’s location, very precisely.

As of now, SafeTrek has move than 250,000 users – however, the application is currently only available in the United States.

With a GPS system and other mapping systems built into almost every smartphone, it makes it easier for the police to find the exact location of the user. Details can be very precise, and there is almost a guarantee that police will be able to find the user even if they are moved from the original location.

The application, SafeTrek, has proved to be particularly popular. This is because it is able to alert the police, even when users are not able to speak or even look at their smartphone. It could also be used discreetly in a pocket, so that any criminals do not suspect police to be on their way – it can also help to stop phone mugging.

SafeTrek was created by a group of students, from the University of Missouri. They were alarmed by how many women in their classes felt unsafe whilst walking home, or to a friend’s house, at night-time. 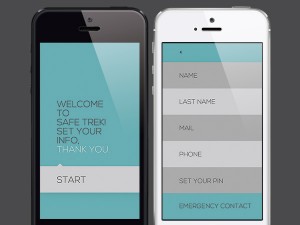 One of the members of the team who created the application, Zach Winkler, said that the campus had a panic system with blue poles around – however, they did not seem to be working at all.

Zach said: ‘After constantly receiving crime report emails and hearing stories from our friends about incidents that were occurring on campus, we decided to tackle the problem that the campus blue light system was failing to solve.

‘The way SafeTrek works is simple – if you are feeling unsafe, simply launch the app and hold your thumb down on the safe button.

‘When you are safe, release your thumb and type in your 4 digit pin number.

‘If the situation turns for the worse and you need help, simply release your thumb and do not type in your pin – your local police will be notified of your location, name, and emergency.’

The application, SafeTrek, currently costs $3 every month to use – it is a subscription service. However, 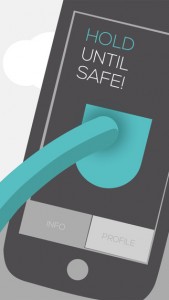 the application has still proven to be hugely popular – this is particularly true with young women.

A claim from SafeTrek says that 70 per cent of subscribers are aged between 13 and 24 years old, with 95 per cent of users being of the female gender.

The team who created SafeTrek are now using the obtained data from emergency calls, in order to identify hotspots where people most often feel unsafe.

The data that they collect could be used by police and security firms, in order to increase and strengthen the patrols in the area, they said.

Mr Winkler, one of the team members behind SafeTrek, says that most people who use the application report that they feel less anxious whilst walking in public.

He did, however, add ‘Maybe it’s installing an extra security light? Maybe it’s more security patrols? Either way, there should be a way to make people feel safer.’

The application is available now in the App Store, with a free download. Users must subscribe to use the service.