At a fairly recent event, the cloud software giant announced a new range of twenty different Salesforce-partner applications for one of the latest wearable devices on the market. This was announced on top of their new ‘Salesforce1 Platform’ – this is Salesforce’s third-party development kit.

The Applications & What They Do

The new range of enterprise-targeted applications for the Apple Watch, released by Salesforce, are used to cover many different tasks – all the way from checking on customer profiles for any upcoming meetings, to providing logistics information for any workers in the field, or even keeping track of projects which consist of a team.

“We need more use cases, we need more apps,” said Lindsey Irvine, the current global director of strategic partnerships and business development , as well as head of Salesforce Wear. “The apps part is key to 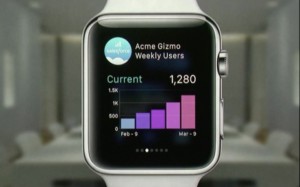 driving wearables into the mainstream. It makes those devices more than just gadgets and can make them into real business tools.”

These new applications are specifically targeted for workers who move around a lot during the working day, and do not spend a lot of time working at a desk. The purpose, of course, is the freedom of space whilst still being able to work.

For example, ClickSoftware are producing management software for field service workers – they are focusing on learning different ways that the Apple Watch can act as an improvement for field technicians’ response times, as well as their efficiency. The Apple Watch, running the application, will be able to alert workers of when and where they need to be for their next appointment or meeting.

“One of the most important parts of the watch and wearables is the hands-free element,” said Edwin Pahk, solution consulting team leader at ClickSoftware. “Our technicians using these devices are working on large equipment and there can be a safety issue. It’s the nature of the Apple Watch being on the body that makes it safer.”

The Apps & The Business World

Out of the few short demonstrations of the applications that were shown, they do not look as if they are going to make a drastic change in the world of business – at least, not anytime soon. Like most Apple Watch applications, the apps by Salesforce do not go a whole lot further than giving people the ability to get quick notifications. Of course, these notifications are helpful, and certainly practical, but they could be delivered in other ways. 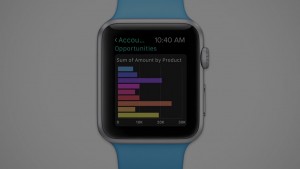 more – every third-party developer is restricted to notifications. Maybe in the future, these applications will gain a whole lot more functionality.

Since the new wearable by Apple launched earlier this year, there has never been a lack of applications – with campaigns, Apple are always reminding people who there are many thousands of applications for the Apple Watch. However, the real issue is that most third-party applications do not work very well – or not how the developers would have intended. They are very slow and always pull data from an iPhone. With advances in technology, we could see business applications being much more practical than they already are.

What Apple Are Doing

The people over at Apple are trying to resolve some of the issues that have been presented. In June, at Apple’s last annual developer conference, they announced watchOS 2. This new operating system will allow developers to create native applications for the Apple Watch – this means that they will work directly on the app without any data retrieval needed.

On top of this, Apple are slowly going to make some of the watch’s additional sensors and features more available –  such as the use of the heart rate monitor and movement sensors.