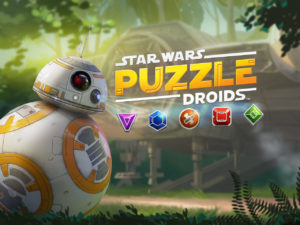 Star Wars Puzzle Droids is an action adventure puzzle game that is brought to you by Disney Studios. It is currently available for both the Android and the iTunes market places. The game features all of your favorite Star Wars characters and takes you through multiple planets exploring different galaxies. Star Wars Puzzle Droids is a Candy Crush style game in which you much match three symbols of the same color and shape together to form a combo and clear them from the board. The more you clear, the more points you get and the closer to your big ultimate moves you are. The game was released in early April and has since sky rocketed to be one of the top apps on both app stores. Currently, Star Wars Puzzle Droids has more than 250,000 total downloads, with an average rating of about 4.6 out of a possible 5 stars across both platforms.

The game is told from the point of view of BB-8 and his adventure during his time in the movie Star Wars: The Force Awakens. The game takes you an amazing journey that fans of the movies will definitely recognize. In addition to exploring the known scenes from the movies, the game will introduce some untold memories from the movie, and allow you to learn a bit more about the characters than the movie let you. You will take on the First Order in this puzzle game as you travel from planet to planet defeating evil and racking up huge combos of points.

Currently, there are over 70 unique levels introduced in the game for you to play through. The game is played in a Candy Crush style so you must be quick to make matches and build up your combos. Star Wars: Puzzle Droids also features all kinds of power ups and ultimate abilities that will help you to clear the board and get towards your objective. Each level in the game has a different mission that you must accomplish before you can move on. There are several different themes that players will run into, for example, having to clear all of a certain color, or dropping an object from the top of the screen to the bottom a certain number of times. 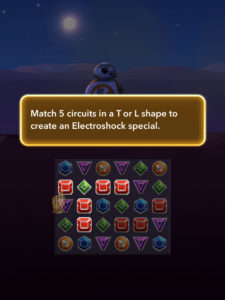 Each time you complete a level in Star Wars: Puzzle Droids, you are getting one step closer to completing all of the memories from your journey and taking down The First Order. On top of that, each level you complete, you can share on social media to see how your friends stack up with you, or see others who have linked their social media sites as well. You can easily compare and see who has the best scores among your circle of people. In addition to having over 70 different levels, there are several different challenge modes and other competitions that players can do when they are not playing through the main story of the game. That gives a ton of player variety and will always leave the player with something to do, and never waiting for more content to be released.

Star Wars: Puzzle Droids does feature in app purchases. The premium currency for the game is the gem. Gems are used to purchase power ups that you can use for the game, and refill your current lives. The game has a life system which basically means you can only play the game when you have full lives. Lives will regenerate on their own, but it is about 1 life every 3 minutes. The gems go for several different packages, one of which is a small package for $0.99 and bigger packages that are much more expensive. Obviously, gems are not required to purchase in order to get the most out of the game, but you will get a slight advantage on any levels that you are stuck on by purchasing these gems.

The game has received a ton of support from the developers, which makes me optimistic about the future for Star Wars: Puzzle Droids. The game is supported in over ten different languages, so odds are, you will be able to play in your native language if you so please. The game is always receiving updates, and the most recent update added a bunch of new levels and challenges to the game. I am definitely optimistic that the game will continue to grow and thrive as long as the developers are keeping up with the same among of effort that they are putting in now. 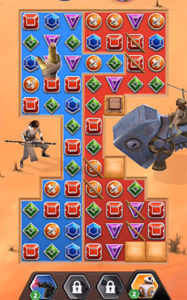 I would definitely recommend this game to almost anyone who is interested in those Candy Crush style of games. This game has absolutely beautiful graphics and that is perhaps the main selling point that I would suggest to anyone interested in the game. If you are a fan of Star Wars and the lore that surrounds that world, especially the Force Awakens, then this game is a must try. The art is so similar to the movie and fans will recognize a lot of their favorite scenes and locations from the movie. In addition to having beautiful art work, all of the animations that were put into this game are completely fluid and make sense.

If I had to rate this game, I would give it a solid 7/10. The only way that this game could improve is if they did something to stand out a bit from other Candy Crush puzzle style of games. The genre has already been so saturated, and it feels like they are just making the same games over and over, with just slightly different themes to appease different audiences. Now this isn’t a bad thing, the game runs extremely smoothly and provides players with great content if that is the type of game that they are looking to play. I would just advise to not expect too much more than a generic Candy Crush style of game when you are downloading and play this game. The game starts off a bit slow, but once you get into some of the higher up levels, the game begins to pick up and become more challenging and requires a bit more thought in order to beat some of the levels.