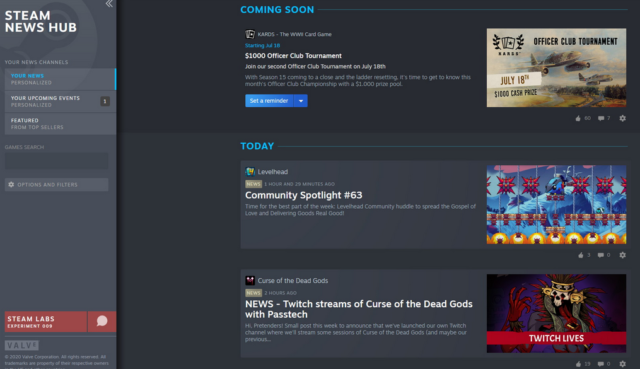 Great news if you’re someone that enjoys playing PC games on Steam. An update this week to the new Steam News Hub brings a lot of changes ahead of the upcoming full release. You can check out the Steam News Hub if you haven’t already and you’ll notice a lot of new features and improvements. We wanted to tell you all about the changes that have come to the Steam News Hub while it’s still a Steam Labs project before it fully releases soon.

If you go to the Steam News Hub and check out the changes, the biggest thing you’ll notice is that the changes make it less cluttered than before. There are multiple changes we wanted to talk about, but the biggest you’ll notice is the changes within the menu bar. The menu bar is on the left and before it used to have a ton of checkboxes that seemed cluttered and thrown together. This section is much easier to read than before and it gives you personalized news as well as upcoming events.

You’ll also notice that within the menu bar, you have a section that gives you the most popular news from the top sellers. If you want to search for specific games, there’s also now an option to do that. You can customize which types of content you will see within the feed. You have the ability to choose which news sources you want to see as well as the types of news you want to see. The options include live stream news, events, and even content updates.

Upcoming events have also been added to allow you to see those events happening in the near future. Previously, you would just see events that had just happened. Beyond that, there’s also a featured section that will see changes and improvements as time goes on. Valve wants the featured section to include events that are the most popular and wants it to include a bigger variety of games. There will also be a curation team that will hand-pick events that will show up in the section as well.

There are also changes in terms of the Steam News Hub layout, which makes it less cluttered and way more accessible. You will notice that the community page link is easier to find as well. If you keep looking, you’ll see there is also a link to the store for each game. This means that you won’t have to see each game name listed on each post. 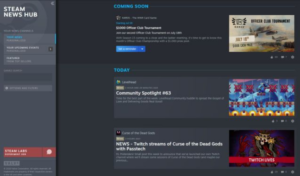 What we love the most is that it cleans up all of these news items. Everything is more accessible this way and it makes it easier to read as well. If you thought everything seemed messy before, then you’ll love the new changes. We really love the layout changes specifically and think it adds more value to this section.

It’s important to note that the Steam News Hub is still in Steam Labs and at this point, Valve hasn’t said when it will be released outside of Steam Labs. Once this feature leaves Steam Labs, it will end up as an integrated part of Steam. We don’t know when that will happen but these changes seem to signify that the full release is coming sooner than later.

Valve does like to change things around and fiddle in Steam Labs, so just because it looks ready for full release doesn’t mean it will be fully released anytime soon. We are hopeful that within a couple of weeks the Steam News Hub will be fully integrated into Steam but we will just have to wait and see.

Have You Checked Out the Changes Made to the Steam News Hub?

We told you initially about the new Hub and how this was a part of Steam Labs a while back. These changes have made the News Hub so much better. This section is going to be where you go to find all things related to gaming news and it’s going to be useful for so many people. We also expect Valve will make even more changes to the News Hub once it’s fully integrated, so some tweaks are likely to happen as Valve gets feedback from users. 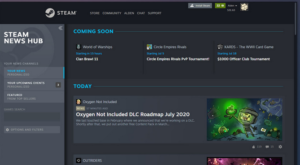 In the comments below, we want to know if you’ve checked out the Steam News Hub yet. We want to know if you’ve previously checked the News Hub in Steam Labs? Have you checked out the News Hub since these new features and the redesign have been released? What do you like most about the new Hub and what do you like the least? Are there any things you would change with the way it looks at this point in time? Will you be going to the Steam News Hub often or do you think you’ll just ignore it a majority of the time?