If you love taking pictures, you will really enjoy the new SwiftKey Android beta update. It allows you to now use your own images as the keyboard themes. Basically, you can upload from either Google Photos or from your own Gallery. Once you have picked out the picture, you can choose the brightness and then upload as a background. This will turn into the background of your keyboard, and you can turn the outlines on or off too. You also can have the long-press symbols in there too if you would like. If you have used the SwiftKey Android app lately, then you will notice how themes are becoming an integral part of the app. 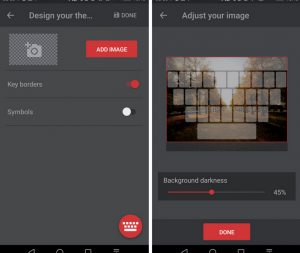 In fact, themes are really bringing in thousands of new people to the app, especially with the personalized themes. There are hundreds of themes to choose from on the SwiftKey Android app, and the new beta update adds even more customization and personalization. You might think that the SwiftKey Android beta update is something new, but really it is not that new of an idea. In fact, the Google keyboard app Gboard has had the ability for a while. Gboard allows people to make their own keyboard themes too, so the SwiftKey Android app now is playing catch up. Some people do not like the Gboard app on Android though. That is why there are other very popular keyboard apps out there, such as the Swiftkey Android app.

The newest SwiftKey Android beta update also brings a new language for the keyboard. The language is not exactly a common one though. You might not have heard of the keyboard language that was added before, but it is Ossetian. We do not think that too many people will find this language useful, but it definitely will be for the select few that use Ossetian. There are already a ton of languages that are supported in the SwiftKey Android app. Given that, it makes sense that now the more specific languages are being added since all of the main languages have been added. 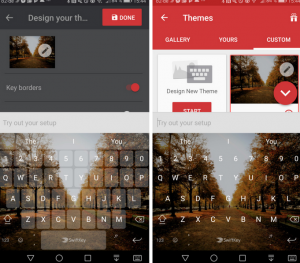 If you would like to get the new photo themes with the SwiftKey Android app, you can download the beta update right now. Once you have downloaded the new beta update, you need to go into the Themes section and click on Custom. From there, you can click on “Start” and you will be able to begin making your own personalized keyboard themes. We know that when a new beta update happens, not all of the beta update features make it onto the final version. When it comes to the new photo themes though, we know this is a feature that will be coming out in the official app. There are already a lot of positive reviews and feedback about the new photo themes feature. This is good news because it will likely be around for a long time. If you have not signed up to be part of the SwiftKey beta update yet, now would definitely be a good time to check it out.