We have some great news if you are a fan of the 90s as a new mobile game, My Tomagotchi Forever, is set to be released in 2018. If you remember the Tamagotchi from 20 years ago, then you likely have an idea of what this new mobile game will be all about. Tamagotchi has been rebranded for the young generation of today, meaning it will be on your mobile phone instead of a handheld little plastic toy. Read on to learn about My Tamagotchi Forever and what this new game is all about.

Bandai Namco Entertainment made an announcement that we are super excited to tell you about. The company is releasing a mobile game called My Tamagotchi Forever, which is based off of the hit 90s toy Tamagotchi. The mobile game, which will be free-to-play on both iOS and Android, is going to be released sometime in 2018. It will be released worldwide and is being developed by Paladin Studios. We have included the just released trailer below that you can watch to see what My Tamagotchi Forever looks like in action.

The game already soft launched in Canada and it is sure to please all Tamagotchi fans regardless of your age. You also are able to head to the official website which is My Tamagotchi Forever, and enter into a contest. If you win the contest, you will be a character that will be shown to everyone who plays My Tamagotchi Forever. The chance to have your very own character show up in the mobile game is pretty cool, so head to the official website if you would like to enter into this contest.

If you had the original Tamagotchi, you might remember that it was more of a solo type of toy. You could not really interact with your friends or anything like that. This is where technology is going to come in handy for the second iteration of Tamagotchi. In the My Tamagotchi Forever mobile game, you will be able to share your Tamagotchi moments and favorite things with your friends. There are mini games found within the mobile app too. Playing the mini games allows you to earn coins and you can use the coins in the game on items. 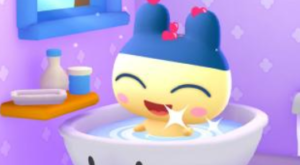 If this sounds like fun to you, then you might want to keep your eyes open for My Tamagotchi Forever. Remember, it will be free-to-play on both iOS and Android. We do not know when yet the game is going to actually launch on Apple’s App Store or Google Play Store. Since the game is already soft-launching in Canada, we can expect that the official release might get here soon. When you think about it, 2018 is not really that far away at this point. Maybe within the first couple months of 2018, we will have My Tamagotchi Forever.

If you are a hardcore fan of the original, then this game is definitely going to bring back the memories. Even if you never played before, you should check it out. It is a very fun virtual pet game that will have you entertained for hours. Don’t forget to head on over to the My Tamagotchi Forever official website and sign up for the contest. You just might be the lucky winner to get your character into the game for everyone to see.