With the success of their latest addition to the franchise, Bandai Namco Entertainment is bringing a classic to life on the mobile platform. Bandai Namco is proud to announce that Tekken will be coming to mobile platforms.  This huge announcement took place at the last big Tekken tournament, and fans seem to be pretty excited about its release. Currently, it is available for pre registration, which means you sign up to receive notifications about the stage at which the game is at. Once the game is finally going to go live, you will also get some added bonuses by pre registering for the game. The awards range depending upon how many people register for the game, and you can get some really good things if a lot of people sign up. I definitely suggest signing up for the game now if you think you will want to play the game in the future. There is even going to be an exclusive mobile only character which you will have the chance to unlock if you pre register for the game.

Tekken is an amazing franchise that is known for providing an amazing fighting game experience to millions of players across the globe. This mobile adaption of the main game will feature many of the same characters from the main game that is available now, and even some extension characters. The mobile version will have a complete story mode for you to participate in, which will go through the Mishima story that we all know and love. Details have not been released as to whether it will follow the same path as the Tekken 7 story that was already released, or if there will be some changes to it, so be sure to stay tuned for it.

Tekken will require a relatively recent phone, so if you are on something more than 5 years old, you will probably not be able to run it. The requirements have been released on their website, so I definitely suggest going to the website and looking to see if your phone will be compatible to run Tekken. It will be available for both the Android market place, as well as the iTunes market place, so that is exciting because everyone will have access to this amazing game.

Tekken will come with 20 characters, each of which come from the main game. Characters you know and love like Paul, Kazuya, Law, and Panda are just a few. There will also be one special guest character that is exclusive to Tekken mobile, so that is something fans can be excited about when the game is finally about to launch.

The game will come standard with online play available from day one launch. The game will be a fighting game similar to how Tekken Tag works from what I gather from the announcements. You will have a few fighters fighting for you, and you can tag them in and out tactically against your opponent. There is also a dojo challenge, which will be monthly challenges that everyone will be able to compete in to win some amazing and unique prizes. There will also be a ladder system which will show you just how you stand against other players from around the world. You will be able to play against your friends specifically, or you can run it up online and play against random opponents. 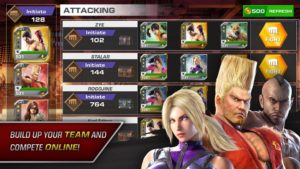 Once the game launches, it will launch with a bunch of live events that players will be able to experience. Every time you log in, you will be given some login rewards especially when the game is first launched. In addition to these login events, you will have a lot of live events going on during the first month that the game is released. The game is set to launch somewhere before Easter, as the developers already have some Easter themed event in their mind that they want to launch the game with. This will have some special outfits and characters that you will be able to earn by competing and winning in the event.

I for one am most definitely excited to see this amazing game ported to the mobile community where a larger portion of players will be able to experience it. Tekken has a long line of games that always seem to impress even the most dedicated of fans, and I am sure that this game will be no exception. You will be able to unlock and improve all of the characters in the game, and the fighting system is completely up in the air for people to guess at at this point. The game will have rotating content for players in order to allow them to get everything they need in order to fight and stay competitive. It sounds as though the game will have some in app purchases, but that may be because the game has a free price tag when it launches. If it is completely free, I can see why they might have these in app purchases, but if there is a price tag and there are purchases to be made, that might turn a big portion of the fan base off. We will have to wait and see how it pans out, but definitely check out their website, and definitely pre register for the game if you have any interest in Tekken and want to see it on the mobile platform!