Valve likes the two-step verification process because it protects gamers and allows you to see if someone is incorrectly typing in your password. In a new update to DOTA 2, the request is being made for you to link the same phone number that you use for your regular Steam account.

You will now be blacklisted from the ranked modes of the game if you are found to be breaking the terms of service Steam has put together. This could be anything from a very low behavior score, improperly boosting your MMR to gain an unfair advantage over others, and a number of other violations of the terms of service.

With this new warning system Valve put together, Valve can now automatically detect if you are breaking the terms of service and automatic bans will happen to those players. As for the new phone number verification, the phone number will then be locked so that the player cannot get into their DOTA 2 account. This means that once that number has been locked, you will no longer be able to get into the ranked matchmaking system.

There are a few issues with the new phone number verification request, but the main goal is to prevent toxic players from continuing to play DOTA 2. Players looking to take advantage of DOTA 2 matchmaking and other games usually have burner phones. Other people tend to use various kinds of software that will automatically generate a phone number that’s unused. This is one way people can get around automatic bans or blocks. 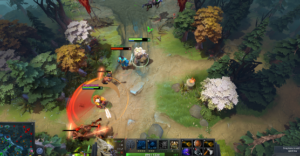 Valve wants to try to prevent this from happening by pushing you to use the same phone number for DOTA as you use for Steam in general. You will see a warning message if you use the burner phone technique, which reads that the phone number you entered is not the same as your Steam account. The message will then go onto say that you need to associate your real phone number with DOTA 2.

Valve wants you to link your phone numbers so pushing for this means that something bigger is likely coming down the road. This is a warning as of right now, and we will keep you updated on if or when Valve releases the penalty information for people who choose not to link their numbers.