If you’re looking for a new Steam game to play this week, we wanted to tell you about a new release called Vetrix. This game first arrived on the Oculus Store and became a huge hit almost instantly. This VR puzzle game is now available on Steam. Keep reading to learn more about what Vetrix is all about and how you might think that this game could rival Tetris.

If you’re into puzzle games then Vetrix may be a game you want to check out on Steam, especially if you’re into VR games. Vetrix is a VR puzzle game that is similar to Tetris and it’s been a huge hit ever since it was released to the Oculus Store. You will need to use geometry skills as well as dexterity, and organization in order to complete the puzzles in this interesting puzzle game. You’ll also notice by the screenshots that the universe in Vetrix is retro-themed. 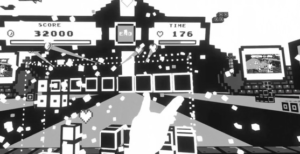 The game has been compared to Tetris but it’s also very different at the same time since gravity isn’t what makes the blocks move around in this universe. You will need to clear blocks while completing lines, so it’s similar to Tetris in the overall design and premise.

In Vetrix, you’ll also need to move the blocks around to the sides, top, and bottom. You must do this in order to get them to fit properly and complete the puzzles. The mechanics will remind you of Tetris if you’ve played that before. This game is also more complex and strategic though, and it’s also done all in a virtual reality setting.

Vetrix is done in monochrome and it’s most definitely a fun game to get into if you like puzzle games that take some mechanics of iconic older games. You solve the puzzle by completing the lines, but the maneuverability of the various blocks is way more interesting than you might think. It’s important you strategize and think about where you’ll be placing the blocks since it’s all done within a 3D platform. 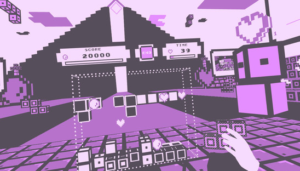 What’s really cool about this game is that there are two different game modes you can play with one being Score Mode and the other being Time Mode. Score Mode is all about trying to get the highest score possible but within only 300 seconds. If you go into Time Mode, you will need to try to hit the target score as quickly as possible.

You will need luck more than anything in order to complete the puzzles in both modes, and it can be pretty difficult if you’re not used to VR puzzle games like this. In the game, you can challenge other players and also share your scores with your friends since there’s an online leaderboard.

Will You Check Out Vetrix on Steam This Week?

Vetrix landed on Steam May 21, and it’s a pretty fun concept when you think about it. It’s a game that has been designed for a more modern system but takes the concepts and mechanics of an iconic game and turns it upside down. It’s important to note that you need to have the complete VR set before purchasing this game. 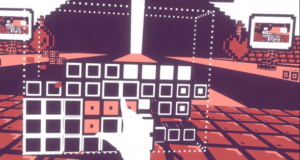 We wanted to let you know that you will need full and complete VR support to play. You also can check out reviews in the Oculus Store before you decide to purchase it through Steam to see what other people have said about the game.

If you’ve played Vetrix already either on Steam or the Oculus Store, we want to know in the comments below what you thought about the game. Is this a game you’ve enjoyed playing in the VR 3D world or do you think it’s just a little too much for VR? What about Vetrix have you liked and disliked so far and what would you change about the game if you could?